Each individual with multiple myeloma may experience different signs and symptoms prior to their diagnosis and some may experience none. Early stages of the disease often present with no symptoms and are identified at the doctor’s office during a routine blood test or while testing for another condition.

Common multiple myeloma symptoms can also be similar to other conditions, so speaking to a doctor is the first step to receiving the proper diagnosis.

Some common symptoms include:

Because multiple myeloma cells form in the bone marrow and upset the natural bone growth and repair process, weakened bones often occur in some form. The most commonly affected areas are the spine, pelvis, and rib cage. Feeling frequent pain in those areas may indicate the presence of multiple myeloma. Additionally, because the bones are weakened, people with multiple myeloma have an increased risk of fracture and may see an increase in broken bones.

In addition to the bone destruction multiple myeloma can cause, it can also cause the release of excess calcium into the bloodstream. This condition, called hypercalcemia, can be severe if not treated quickly. Loss of appetite, increased thirst, increased urination, restlessness, confusion, nausea, or vomiting may indicate an excess of calcium in the bloodstream and requires treatment.

Problems with the bones may cause a trickle-down effect that impact other areas of the body, specifically the nervous system. If the bones become weakened near the spine, they can press on spinal nerves, causing a spinal cord compression. Sudden severe back pain, numbness in the legs, or muscle weakness in the legs can all indicate a compression of the spinal cord. A “pins and needles” sensation of weakness and numbness in the limbs may also indicate nerve damage caused by the abnormal proteins formed by myeloma cells that are toxic to some nerves in the body. 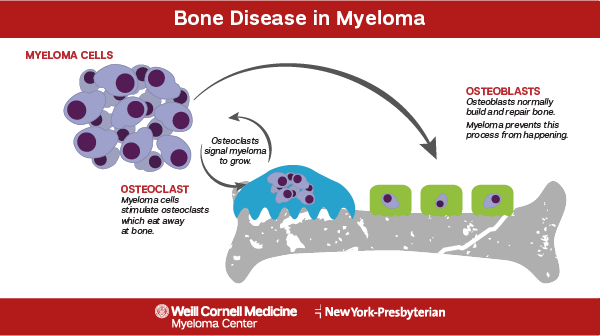 A decreased production of red blood cells can lead to a condition called anemia. Anemia can present itself as weakness, fatigue, shortness of breath, and dizziness. A majority of patients diagnosed with multiple myeloma have anemia at the time of diagnosis. 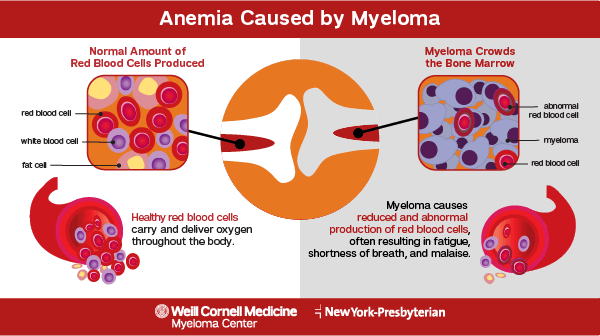 The excess M protein and calcium found in the blood of multiple myeloma patients can overwork the kidneys and impact their normal function. A decrease in the amount of urine produced can be an initial sign of kidney problems. If the kidney function is affected to a severe level, it can lead to kidney failure. Symptoms of kidney failure vary, but can include fluid retention, shortness of breath, fatigue, confusion, nausea, weakness, or chest pain. 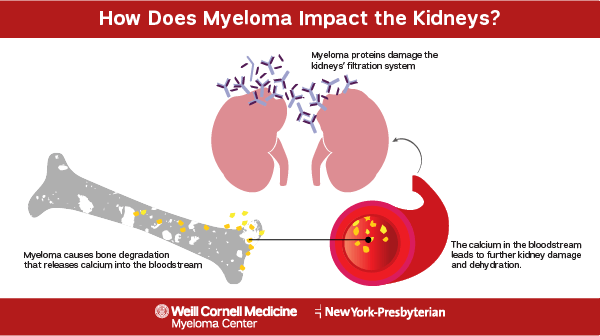 The abnormal antibodies produced in a person with multiple myeloma crowd out the normal antibodies that help the body fight off infection. This impairs the immune system, causing the body to lose the ability to successfully fight off all infections. This leads people with multiple myeloma to experience an increase in infections compared to the normal population. Symptoms such as a high fever, chills, sweating, muscle aches, coughing, sore throat, pain/redness at the site of a wound, fatigue or diarrhea may indicate a person has an infection they can’t easily fight off.