The national Multiple Myeloma Rounds Program was established in 2016 to provide a forum for local healthcare professionals to meet on a regular basis and address specific issues related to the diagnosis and treatment of multiple myeloma patients. Multiple Myeloma Rounds offers the opportunity for attendees to exchange information, network with colleagues, share best practices and learn the latest information on new therapies and advances through interactive case studies and presentations by experts in the field.

Initially, the program started as a result of a collaborative effort between specialists at several institutions in the Chicago area. As a result of the success of the Chicago Multiple Myeloma Rounds, it has quickly expanded to include a committee of 24 different institutions and 36 multiple myeloma specialists. In 2017, the Committee began implementing the Multiple Myeloma Rounds Programs in five cities across the country. 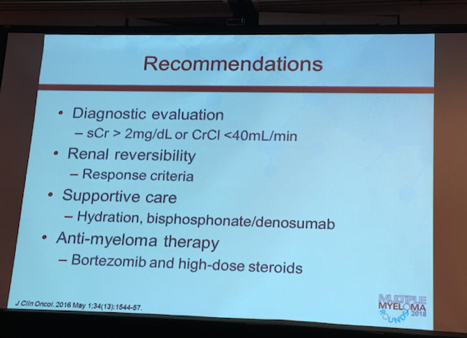 Dr. Rossi stated that more than half of all multiple myeloma patients will experience some degree of kidney disease – most frequently cast nephropathy (CN) – either at the time of diagnosis or throughout the course of the disease. She emphasized the importance of proper screening and detection, as reduced kidney function has been associated with poor prognosis and shorter survival. In order to bring this topic to life, Dr. Jorge Monge shared a case study highlighting how the implementation of supportive and myeloma-directed therapy, as well as an interdisciplinary treatment approach resulted in full recovery of a patient’s renal function.

Additionally, physicians from other area institutions presented on three additional topics – ranging from the treatment of frail or elderly multiple myeloma patients to management of patients at first relapse. An interactive Q&A session followed each of the presentations, allowing healthcare professionals the opportunity to learn from one another in an effort to improve patient care.